The Legislative Council Study Committee on the Investment and Use of the School Trust Funds met for the last time today. They spent the entire meeting debating proposed legislation.

The Committee  decided against introducing a constitutional amendment that would have modified the investment strategy of and distributions from the Common School Fund. Many of the public members of the Committee were concerned by potential unintended consequences of the draft constitutional amendment. Ultimately, they chose to make a recommendation to re-evaluate the investment of BCPL funds once information about the results of their new investment strategy is available.

The Committee will prepare a final report, which will be presented to the Joint Legislative Council Committee when the Legislature re-convenes in 2019.

Here is a summary of their final recommendation and the draft bills they voted in favor of introducing.

Recommendation for Further Study:  The Committee decided to make the following recommendation in their final report.

“The Study Committee on the Investment and Use of the School Trust Funds:

Allowing SWIB to Use the Prudent Investor Standard if BCPL Contracts with Them for Investment Services: The Committee voted to introduce legislation allowing SWIB to invest the Common School Fund using the prudent investor standard  if BCPL chooses to contract with them for some investment services. BCPL has the ability to delegate some investment authority to SWIB under current law.   BCPL gained the ability to use prudent investor standard in 2015 but the current statutory language related to BCPL’s ability to delegate to SWIB was not updated to reflect the prudent investor standard legislation. WEMTA is comfortable with the current draft of this bill because it does not mandate that Common School Fund dollars be transferred to SWIB.

Promissory Notes:  The Committee voted to introduce legislation allowing banks to lend to municipalities for terms of up to 20 years (they are currently limited to 10 year terms). This bill was drafted due to concerns raised by the banking community that BCPL had an unfair advantage over private banks because they could make loans to municipalities for longer terms than banks. 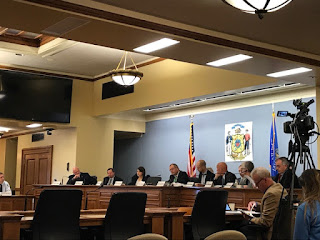 Posted by WEMTA Advocacy at 5:37 PM

These comments are moderated and will appear once approved.